The Singularity is coming: A Monkey-coder's Perspective

I would like to introduce a great genius futurist hacker---Ray Kurzweil. You can google him then you will get a lot of information. He discussed how technology has been changing our future in his book "The Singularity Is Near: When Humans Transcend Biology". He gave examples from different fields, such as quantum mechanic, nanotechnology, AI, biotechnology, etc. One of the interesting things is that Kurzweil made a list of predictions including the time frame:

1, 2020s---Personal computers will have the same processing power as human brains. Human will build the non-linear math model of the brain by reversing engineering. Machine will pass the turning test in 2029 that will be the start of Strong AI.

2, 2030s---Billions of nanobots will enter into human body to antiage and against disease. Today's sci-fi's mind uploading will become possible.

3, 2040s---1000USD buys a computer a billion times more powerful than the human brain. Human body 3.0(as Kurzweil calls it) come into existence. We will become Cyborg. The human-machine civilization will be emerged from the merge process of the biological evolution and the technological evolution. Human beings as the high-level intelligence creatures will not feel lonely anymore. 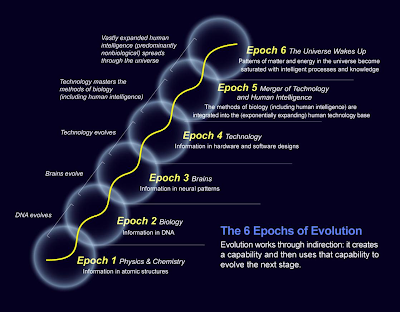 This epoch starts at the beginning of the universe. In this epoch, information is mostly held in subatomic structures such as particles and atoms. That is, the most complicated stable objects in the universe do not exceed the molecular scale in size or complexity.

This epoch starts with the beginning of life on Earth, suddenly giving rise to more complicated, yet stable, organisms that are capable of growth and self-sustainment. However, in this epoch organisms do not change within their lifetimes as evolution takes thousands of generations. Moreoever, in this stage, genetic information is stored in DNA molecules.

The evolution of life gradually produced more and more complex organisms, necessitating the need for fast central control and thus giving rise to the evolution of brains. With brains, organisms can now change their behavior dynamically to suit changes in the environment and can also learn from past experiences. Evolutionary information is, in this stage, stored in neural patterns.

Evolution of brains culminates with the evolution of humans, which possess the ability to create technology. In this stage, technological designs are also subject to evolution and information is held in hardware and software designs.

Epoch 5. The Merger of Human Technology with Human Intelligence

This epoch, which Kurzweil argues we are in the process of entering, is where technology reaches a level of sophistication and fine-structuring comparable with that of biology, allowing the two to merge to create higher forms of life and intelligence.

Epoch 6. The Universe Wakes Up

After mastering the methods of technology and biology, Kurzweil predicts that human/machine civilization will expand its frontiers into the universe, gradually (or perhaps explosively) consuming the contents of the cosmos until the universe reaches a 'saturated' state where all inanimate matter has been converted to substrates for computation and intelligence, and a truly universal super-intelligence takes form.


This book was published by Viking press(Same publishing as KK's What Technology Wants) in 2005. It's one of the best-seller book in Amazon. This book is still Top-10 sales of Kindle version in 2011. It's definetely influencing on the world view of younger generations. But it does not mean Kurzweil's philosophy is an absolute standard. There are two critical articles "The Singularity is Far: A Neuroscientist's View" which argued about reverse engineering the brain is harder than Kurzweil's approach and Is The Singularity Near Or Far? It's A Software Problem which questioned some of Kurzweil's predictions are too optimistically.

Before I've read Kurzweil's book. I have been hacking a bunch of things, such as philosophy, technology, traditional religion, metaphors of mythology(The Lord of the Rings and DND are my old testament, Foundation series and The Last Question are my new testament). I noticed that these fields have a philosophical fundamental elements: Unity and Diversity. In technological level, I tried to put them into the cloud which I talked about on my last article. The concept of cloud is merging every fields of information technology into a complex system. You(hackers, amateurs, commercial company) have to concern many issues(hardware system, Operating System, optimization, data communication, security, openAPI, etc) if you want to build a cloud. According to wired magazine and some sources of information, we must cross 3 stages to reach the singularity at least.

2011---2022, the whole complex system will be formed by merging information technology.

I do believe that there are 4 singularities in the evolution of the history of the universe. And we are getting closer to the 5th one:

-[ 1st, The Singularity of Universe:

Most hydrogen atoms were born at the beginning of time. They are as old as time itself. They were created in the fires of the big bang and dispersed into the universe as a uniform warm mist. Thereafter, each atom has been on a lonely journey.

-[ 2nd, The Singularity of Biology:

Cambrian explosion, around 530 millions years ago. Most of species we have already know today are heritance from the evlution tree of after-cambrian.

I agree with KK's view: The creation of language was the first singularity for human 50,000 years ago. It changed everything after language-creation and the language accelerates hacking the new things. And it provided a effective way to spread the knowledge out.

The collision of Hebrew religion and Greek philosophy from BC 180 to AC 90. The result of the collision was not just about Christian religion. It was about a strong paradigm that merged the theological philosophy and philosophical theology, which still have influence today. Those 4 strong communities we can see today: Jew, Anglo-Saxon, German, Slav. I really don't want to talk about this one here. But I did.....

-[ 5th, The Singularity of Human-Machine civilization: 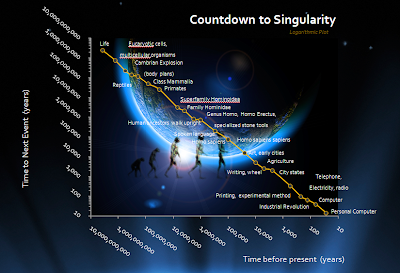 When machine process capability beyond the human brains in 2040s. I'm thinking what if the singularity will come in 2046 that must be a joke or metaphor which from SOMEONE. Don't you remember ENIAC was produced in 1946. A bunch of barries are still out there which stuck us to reach the strong AI, we need a breakthrough. I would like to cite Marvin Minsky's philosophy here:" If you understand something in only one way, then you don't really understand it at all. This is because, if something goes wrong, you get stuck with a thought that just sits in your mind with nowhere to go. The secret of what anything means to us depends on how we've connected it to all the other things we know. This is why, when someone learns "by rote," we say that they don't really understand. However, if you have several different representations then, when one approach fails you can try another. Of course, making too many indiscriminate connections will turn a mind to mush. But well-connected representations let you turn ideas around in your mind, to envision things from many perspectives until you find one that works for you. And that's what we mean by thinking!".

We are getting closer to the singularity today. The model of "Sci-fi(theology,philosophy) --> Science--> engineering" is still keeping running at exponential growth rate. Kurzweil gives a definition of Singularitarian is "someone who understands the Singularity and has reflected on its meaning for his or her own life." and the 6th epoch is the wake up of the Universe which implying another type of god. Seems familiar if you have read the Issac Asimov's book(Foundation series and The Last Question). Don't give me wrong, singularitarian is different from a sort of artificial religion reffered to as Scientism in Foundations. The stage of wake up of the Universe is very similar to the final type of Strong AI in "The Last Question".

Singularity is coming! What would a christian hacker do? KK cited a sentence from Rabbi Zalman Schachter-Shalomi:"There is more good than evil in the world--but not by much.". Even if the positive part of technology is only 0.1 percent greater than negative part, we still have to embrace it. Find your faith and position in this era, and go through with your sacred vision into the secular world.

I really liked the article, and the very cool blog