exokernel,can we talk about it?

of course we have to talk about it.Actually we have been trash-talking on OS topics for few months.But we still dont get start to writing the own ones.dont be rush,man.OS is a definitely tough hack in the phenomenon world.It will takes you few years even 10 years get involve with it.sounds hard,right? whatever you think how hard it is,that doenst means we could put it away from our hacking(routines).we still need to keep eyes on it.

You may doubt that how can we keep up with new tech in a fast-food world,while People just focus on things which turning to be rushsss.I dont wanna talk about how people get fucked by this world right now.Just noticed that hardware/software co-hacking are a bunch of logies(ontology,methodology,epistemology) that across the hardcore fields in computer science(and engineering) including OS,compilers,networking.The 3logies is the strongest paradigm which existing for xxxxxx years.It's cames from the most powerful book---The Holy Bible.The 1st time of Jews and Greek's cultural collision happend about 2300 years ago that historical event formed a new way of thinking which Abraham Joshua Heschel was call it "ellipse it revolves" that means we believed something cant to prove it by reasoning but by our pure faith to LORD(religion,theology),and the rest of knowledge we can figure it out by reasoning(philosophy).The interesting is Hebrew(希伯来) and Greek(希腊) are same root in CHinese:-)

Back to the topic.Im a monkey-coder,why do I need to know above?Because you will get different informations on different postions when you hack the kernel(or should I said OS design?).A simple explanation like this:
Ontology->Trying to figure it out what OS it is.
Methodology->trying to stand on different positions look into the paradigm of the OS.
Epistemology->trying to do above 2 again and again that would making a whole organic knowledge system for you.

On the other hand,different languages connected these different world views as same as OS design.Thinking about that,The relationships between the arch of OS itself,scheduler,kernel thread execution just like,you know what,I really wanna saying"Holy Father,Holy Son,Holy Spirit".is there any possibility to reduce those components less than 3?You could try it but it will be sucked.And why does conventional OS(monolithic,even microkernel) has to make a distinction between kernel space and user space?for security issues(sin)?oohh,aha,sinful man living in user space and trying to get some resources from kernel space by scheduler(JC?).pthread is a kind of execution which existing in phenomenon world and...you might know what I want to say,right?...kernel thread is really big stuff do things which sinful man cant go through with "real desert".I cant talk more because I cant give you a clear explanation about Philosophical-Theology Model in english(a world view trouble?).

What's different between conventional OS and exokernel[1]?a lot.really a lot.IMO,exokernel is a better PTM which get closer to "the truth".You'd better take a peek[2] on MIT exo website that provided some documentations(papers)[3].exokernel's model picturing a better world than current one.A meta-kernel has been made,then hackers(not cracker) can customizing their own kernel and build their own app on it. 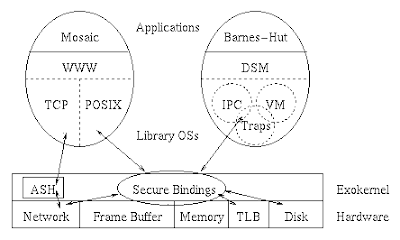 As a OS amateur,need to keep your mind open and trying to get "a little bit" wisdom from the beautiful creations....wowo,it's been a long bullshit,I think I need to go to bed for reading "Joel on Software"(book)[4].

May Lord's hacking spirit guide us!!!

Hi, I need to contract your service for a port Openwrt to our board and add all functions to the linux code to work correct.

We cant make it to work with the ethernet interfaces, please let me know how we can work with this problem and how much could be this costs,