Linux has a lot of distros around the world.The first time I used Linux is Red hat 9,then I was turning into debian.I have use Fedora in past 2 years.Becuase it's pretty easy to use which is it doesnt needed spend more time for compile the source code by youself.

Today is a big day.I have try out install the most difficult linux i ever heard---gentoo.A friend told me that it is a real hacker's distro.Although it's none of business about whether you are a hacker and which linux distro you using.ANd it still worthy to try.Im installed the gentoo in VirtualBox which is a virtual machine software developed by Sun Microsystem(also under GPLv2).I was watching a movie which named of Revolution OS while it compiling the gentoo kernel.what a enjoy life! 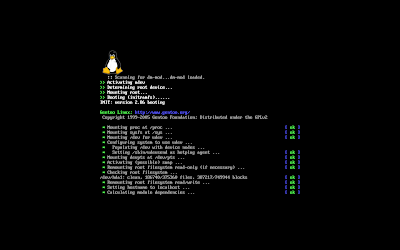 gentoo is cool,about should i turn to it(nake host)?I have to think about it.Before make a decision about which distro i will use.The htdp's excersise has the higher priority I have to take it out!May Lord bless!
Posted by Unknown at 3/13/2009 01:01:00 AM

oh yeah,gentoo is cool,i think it's better than other Linux.